Includes a 1-Year Parts and Labor

The Eureka Mignon Filtro is a true coffee grinder equipped with 50mm flat hardened steel burrs, manual grind control only, and a coffee grounds container for the larger batches called for when making drip coffee or French Press.

The Eureka Mignon Filtro cares about one thing: high quality grinding action for drip coffee and French Press. The Mignon Filtro does this with a few important tools. The Micrometric Regulation System, patented by Eureka, is a stepless grind adjustment method that offers precision as well as ease of adjustment. 50mm flat hardened steel burrs offer uniform particle size and quick output.

With the grounds container attached you can grind in large batches for drip coffee and other brew methods. Thanks to the ACE system, the electrostatic charge of coffee is eliminated, preventing clumping when dispensing.For capacity and speed, the Mignon Filtro's hopper holds 300 grams of coffee and grinds at 1.7 to 2.2 grams per second.

The Eureka Mignon Filtro is the right choice for you if you're particularly in love with smoother, lighter drinks like drip or French Press. It's a small grinder so you'll have space for it just about anywhere, and between the 50mm flat burrs, the stepless adjustment, and attachable grounds container, you'll be making cafe quality coffees with ease.

Grind adjustment is easy and stepless. All you need to do is turn the knob on the top of the grinder until you reach your preferred grind fineness. The grind adjustment system is stepless, providing you nearly infinite grind settings for ultimate precision.

The Eureka Mignon Filtro uses 50mm flat burrs made of hardened steel to grind through coffee beans. With the 260 watt motor spinning at 1350 RPM, the Mignon Filtro dispenses 1.7 to 2.2 g/s.

The included grounds container attaches at the front of the grinder, catching grounds as they dispense, making it easy to prepare for larger batch drinks like drip-style coffee or French Press.

All you need to do to grind is press and hold the manual pulse button on the side of the grinder. The Mignon Filtro will grind for as long as the button is pressed, and stop as soon as it is released. 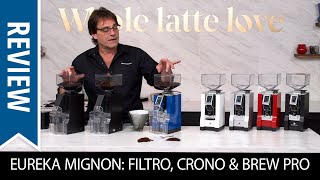