This color variation of the Rocket Espresso Appartamento is an exclusive customization offered by Whole Latte Love. 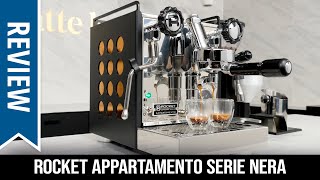